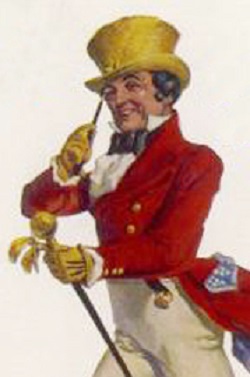 Johnnie Walker is the world’s most recognised whisky brand and its origins are firm rooted in the town of Kilmarnock.

John Walker (1805–1857) was a grocer in Kilmarnock who originated what would become one of the world’s most famous whisky brands in the world.

When his father Alexander died in 1820, John was left £417 in trust. In 1820 the trustees invested in an Italian warehouse, grocery, and wine and spirits shop on King Street in Kilmarnock.

An 1852 flood destroyed virtually all of the stock Walker held, but the business recovered within a couple of years. His own whisky brand, then known as “Walker’s Kilmarnock Whisky” was popular locally.

In 1833 John married Elizabeth Purves. Their son Alexander had apprenticed with a tea merchant in Glasgow, and there learned the art of blending tea. When he returned to take over the business from his ailing father, he used those skills to create Old Highland Whisky, (eventually renamed Johnnie Walker Black Label) the first of Walker’s blends which became popular far beyond Ayrshire.

Although he gave his name to the whisky, John Walker was a far less important figure to the brand than his son, Alexander, as it was he who persuaded his father to abandon the narrow realm of the grocery trade and to go into wholesale trading. At the beginning, the firm offered a range of spirits: Campbeltown whisky from the Kintyre Peninsula; whisky from the Inner Hebridean Island of Islay, with its pungent smokey flavour; patent still, or grain, whisky; and “Glenlivet”, Speyside whisky. Even so, whisky sales under John Walker represented just 8 percent of the firm’s income; by the time Alexander was ready to pass on the company to his own sons, that figure had increased to between 90 and 95 percent.

The magnificent Johnnie Walker Bond building still stands in the town centre and has a statue of John which does not take the form of the famous ‘Striding Man’ image created in the first half on the 20th Century and which is recognised the world over – along with the ‘Born 1820 Still Going Strong’ motto.

Sadly, the closure of the huge Johnnie Walker bottling plant in 2012, (once the world’s largest) and the associate blending and bond operations in and around the town severed all links with Kilmarnock.