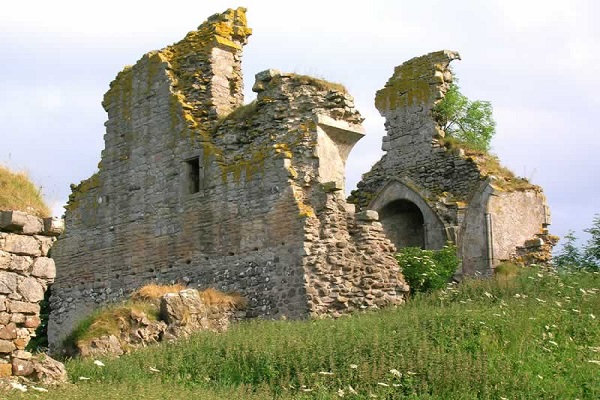 Craigie Castle was originally a 12th century fortification, founded by Walter Hose or his father.

Standing on a low ridge, in the mid 13th century the Lindsay family incorporate the remains of an earlier building, when adding a stone hall house. In the 15th century, the Wallaces had the hall house vaulted and raised in height to make a tower house, with a first-floor hall and at least one other storey.

The main block divides the castle in halve, with ranges of outbuildings in the two unconnected extended courtyards. The castle was isolated on the ridge by two massive ditches, which probably connected with east and west lochans. With high-level deeply splayed windows and a fireplace, only the north and south walls of the tower stand to any height and in the courtyards the walls are confused by collapsed masonry. There is a 16th century splayed shot hole near the entrance passage and at the west end of the southern ditch are the remains of what may be a drawbridge abutment.

To the north-east of the castle, a wide third ditch cuts the ridge to form an outer bailey and after 1600 the castle was abandoned and allowed to fall into ruins. A miles south-west is Helenton Mote and 4 miles north-west is Dundonald Castle.
Craigie Castle is located east of Craigie Mains, off the B730. 5 miles south of Kilmarnock, on the A77-B730.